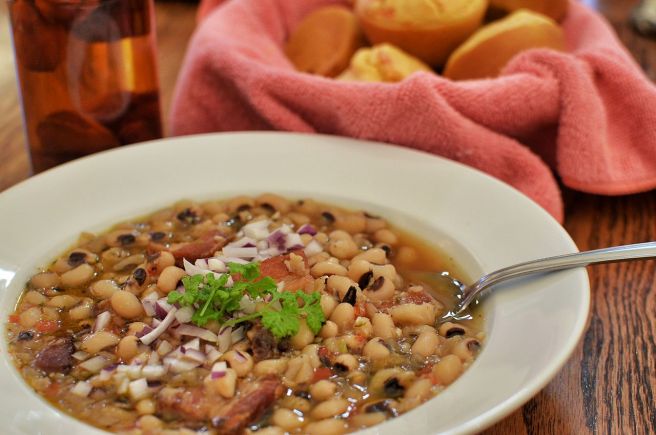 Did you notice all the bags of dried black-eyed peas piled at the entrance of the local Winn Dixie? Do you know why they are being featured this time of year? Eating black-eyed peas on New Year’s day is a southern tradition associated with new year luck.

Traditions say that during the Civil War, when Union soldiers raided the Confederate army’s food supply and southern farms, they left these beans behind. It could be that they were grown along the fence lines and often shared with the cows, hence the nickname “cowpeas,” and simply overlooked. Another explanation comes from African American history, where newly emancipated slaves celebrated dishes of these peas. Ancient Egypt history suggests that eating the pea, was a way of showing humility to the gods. Pair them with cornbread, symbolizing gold.

Pork is usually served to accompany these peas. Why? Did you know that, unlike chickens and turkeys, who scratch backwards, pigs bury their snouts in the ground and move forward - the same direction you want to head in the new year. Actually, since pigs are usually slaughtered in the fall, pork would be an ideal food for this time of year. Pork (and cabbage) is traditionally eaten on New Year’s in Germany and Eastern Europe, and came to America with immigrants.

Also hailing from Germany and eastern Europe, cabbage, often in the form of sauerkraut, would have been just about ready to eat after the 6-8 week fermentation process following a fall cabbage harvest. In addition, the strands of cabbage in sauerkraut or coleslaw can symbolize long life. Cabbage also can symbolize money.

Black-eyed peas go hand in hand with greens (often collard greens). Their green color symbolizes folding money. Often hung in the South by the door to ward off evil spirits, why waste them drying there when they can ward off the empty stomach grumbles?

Lentils are also on the traditional foods menu, often served in Italian homes. Their round shape look like coins. They are often eaten after midnight along with pork and sausages.

In Filipino culture, New Year’s eve is celebrated with fruit. Twelve, to symbolize each month. In Spain, Portugal, and Mexico, 12 grapes are eaten at midnight with the clock strokes.

In Scandinavian countries, fish, especially herring, was considered to bring good fortune. Depending on good fishing for prosperity, eating herring was a way to hope for a good catch. Fish are symbolically lucky in three ways: their silvery scales resemble coins, they travel in schools, representing prosperity, and they swim forward, symbolizing progress.

In Asian countries, it is traditional to eat noodles on New Year’s Day. Their length symbolizes longevity. Be sure to get them into your mouth without breaking them!

The Greeks celebrate with a cake, traditionally baked with a coin, offering good luck for the person who gets this slice.

Dave Reed Insurance wishes all our customers the best for a Happy New Year.